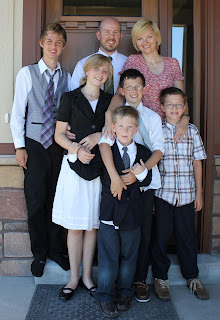 The last couple of years have held a lot of changes for us. It goes back to the middle of 2010. In June 2010 we decided it was time to move on and met with a builder to help us plan and build a new house. 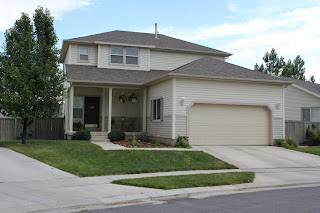 In July 2010 we listed our house for sale by owner... nothing. In August we decided to list with an agent. We received on offer in September and moved out Oct 30, 2010. We moved in with Jennifer's sister and her family, which was so generous of them. We had a wonderful time with them for 2 ½  months. They moved into a new house and we stayed in their house to help sell it. We lived there for 5 more months while our home was being constructed. In December 2010 our builder asked us if we wanted our home to be in the Utah Valley Parade of Homes. We said yes. We knew it would bring many benefits, but we were not truly prepared for the extra stress. It was all worth it in the end as we have a beautiful home now. 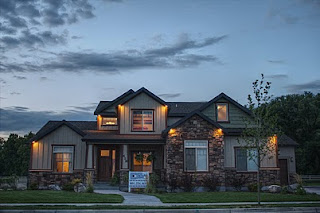 Of course, moving brought a lot of changes for the kids. They had to change schools just a few months into the new school year. Ian had just started his freshman year in high school and when we moved he went back to a jr. high(Most Utah schools have 9th grade in Jr. High). Sophia had just started 7th grade. Theron, Orion, and Dylan were all pulled from the only school they had ever known, one of the best schools in the state. No one was happy. It was a fairly difficult transition. We put Ian and Sophia in a jr. high charter school, but couldn’t get the younger kids in the elementary portion of the same school, so we put them in another charter school which had just opened. Ian and Sophia soon made many friends and loved their school. The other school really struggled and the younger boys along with it. It was trying for them to go from one of the best schools to a school that was struggling. Last year they were not very happy there, but they chose to attend the same school this year, to be with friends, instead of changing to the local elementary. Next year they will all be able to get into the same school as Sophia. We live within walking distance of both of the schools which is very nice. 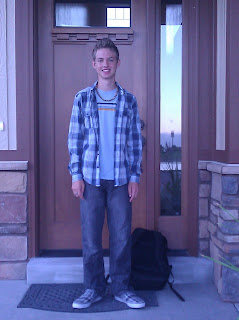 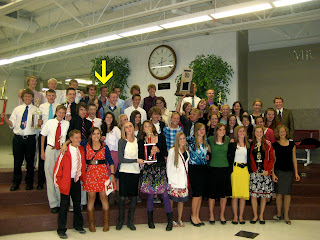 Ian played soccer for his jr. high team in the spring. He is part of the state champion cross country team at his high school. He is loving his classes and not having to wear a uniform. He has great style and is so handsome. He turns 16 in December and cannot wait to date, drive and get a job. He already has his first date set up with his friend, Lily, for New Year's Eve. We can’t believe that our baby is that old. He just achieved Life scout rank and is starting to work on his Eagle project. He is doing amazingly well in life. 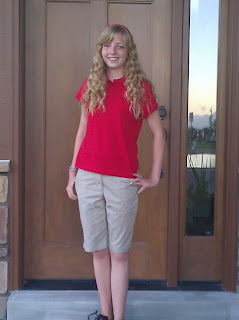 Sophia is an 8th grader. 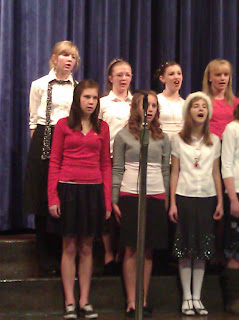 She is on the student council at her school and a jr. high national scholar. She loves to sing and is in the women's choir at school. Don't ask her to skip school, she loves it too much. 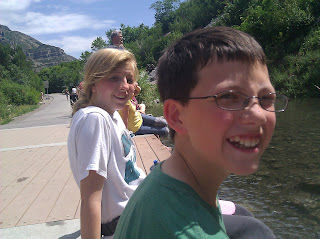 This year she worked on walking. As part of her young women’s group at church they were doing an activity where they walked from the Draper LDS temple to the Salt Lake City LDS temple, around 24 miles, in one day. She spent the summer building up her strength. She whined a little at first, but grew amazingly strong and fast. Now she walks faster than any of us. We are so proud of the hard work she put in and the progress she made. 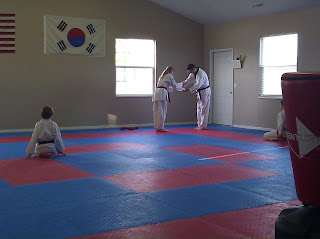 She is also just a step away from her black belt in taekwondo and no longer afraid of kicking someone hard. 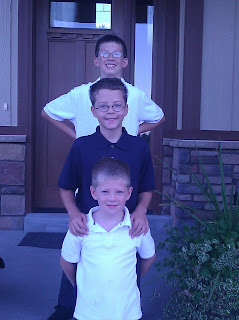 Theron(top) is in 6th grade. 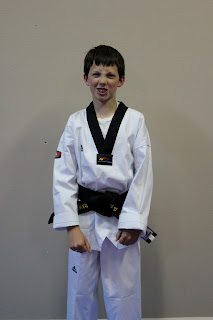 He worked really hard this past year and was able to receive his black belt in  taekwondo. He was 11 at the time. It was so great to see all his hard work pay off. 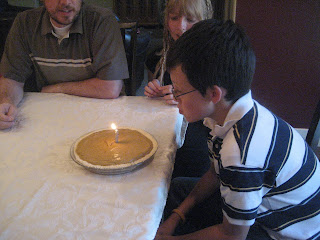 He is now 12 and a Deacon. He received the Aaronic Priesthood this year. That means that he helps to administer the sacrament on Sunday, sets up chairs and gathers the fast offerings. He loves being a part of the Deacons. He is doing well in scouts and learning a lot there. His school provides the 6th graders with laptops. He is loving that. He is currently working on swimming and doing really well. We're surprised by what he has learned and accomplished in such a short time. He started violin last year and doesn't make my ears bleed when he plays. We wish he would play more. He is such a happy guy. He has the best laugh and is so funny. 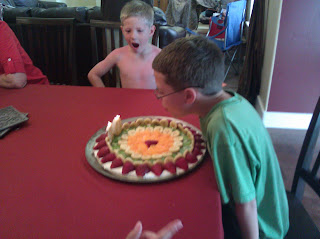 Orion is in 4th grade. He is a friend machine. He loves to make new friends and have them over or go to their house. 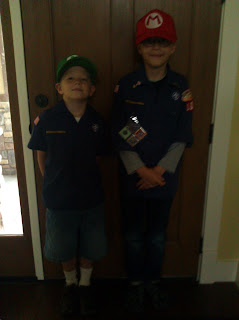 He earned his Bear Badge in scouts this year and is loving Webelos. He loves swimming. He is a fish. He would probably do it everyday if he could. We hope to get him on a swim team this coming year. Orion is so polite and so sweet when he's not being otherwise.:-) 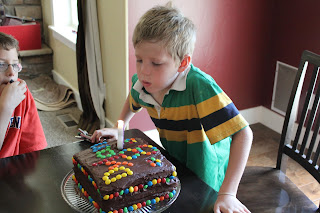 Dylan is in 2nd grade this year. Let's just say that Dylan is full of energy and constantly keeps us on our toes. We thought youngest children were supposed to be calm and give us a nice break in our old age. He is still our baby though and likes to snuggle and let us baby him. That being said he does the darndest things that leave us asking, "WHY?" a lot. He is also a swimmer. What he lacks in technique he makes up for with energy. He wants to do whatever Orion is doing, so there is a little competition there. It's good and bad. 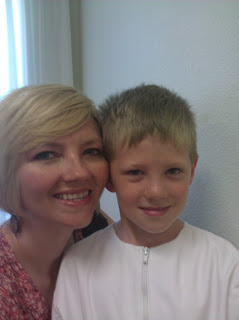 He turned 8 this summer which means that he was able to be baptized. He has the sweetest testimony of his savior, Jesus Christ. 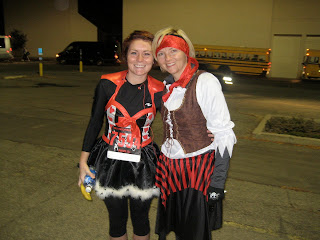 Jennifer's year was consumed by the process of building a house. She didn't thrive on the endless questions and choices when it came to designing the home. It was enjoyable at times and at other times incredibly stressful. She is loving being a home and family manager more than ever. Some days are leisurely and some so full it doesn't seem possible. With her extra time she has been able to attend the temple more often. She has also started to dabble in family history, which can be frustrating, but so satisfying when someone is found. She trained for and ran her first half-marathon with her amazing niece, Haley. It was a Halloween race. She hated the training and made Kenneth promise to remind her how this was going to be it for her. Of course, a few weeks after the race she had changed her tune and said she would do it all over again. Crazy. She still loves yoga the most though. She and Kenneth are co-leaders of the Webelos den. They are actually enjoying it. 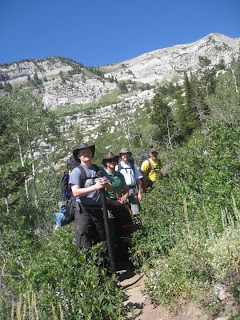 Kenneth's year was also full of home stuff. There were meetings every week that they would go to over his lunch break. He works for TriVir LLC, a consulting company based out of VA. He is a senior consultant there and enjoys it. There is not too much travel, but he always prefers to be back home. He enjoys finding all the good places to eat while he's on site. He has learned more artisan bread making this year. They are so delicious. Jennifer does not mind him being the bread master. He loves camping with his friends up in the mountains. They usually go over Labor Day weekend. He went deer hunting this year with no luck. He's hoping to go duck and goose hunting this month. 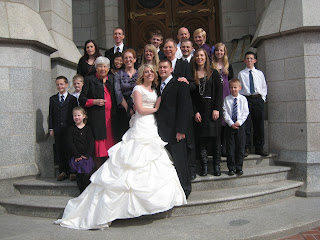 We have been able to enjoy Kenneth's family visiting two times this year. It was so fun. In March it was for the wedding of his baby sister, Eden. 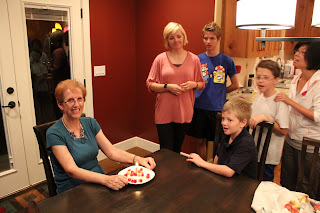 In September we were able to celebrate Kenneth's mom's birthday with her. We miss them and love when they come to visit. We would love for them to move to Utah (hint). 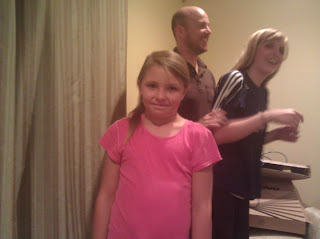 In August we had the Pelo family reunion. It's so fun when we all get together. We were able to get to know some cousins better than ever before. During that time we discovered the Scera pool which has 2 diving boards and 2 water slides. We plan on spending more time there this next year, now that Kenneth is a champion at skipping across the water after coming off the water slide. 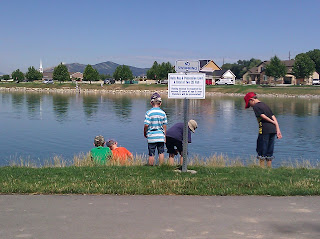 We live right across the street from a fishing pond. We need to get fishing poles this year so that we can actually take advantage of it. It has a little beach and the kids spent a lot of time over there playing in the water. 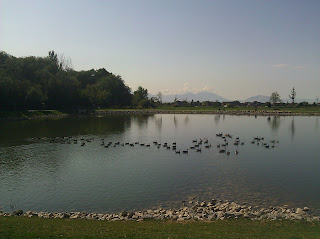 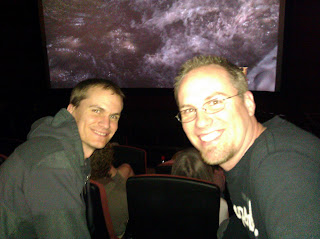 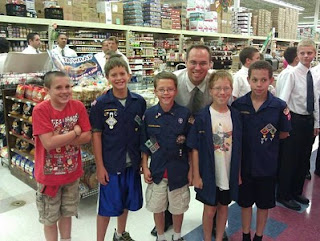 Our funny obsession this year has been Kid History. If you are not familiar with them. You must watch them all. We ran into the creators of it twice this year, as they are local boys. We aren't stalkers, we're just lucky. 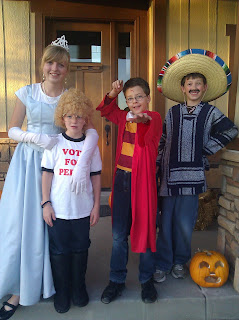 We love them so much that Theron dressed up as a character from episode 3 for Halloween.
Ian is an international art thief, Michael Buble, or Frank Sinatra. You choose. 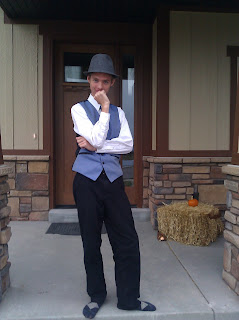 Jennifer's parents are excited to head off on their 2nd mission for the LDS church. They will be serving in East Lansing, MI at the religious institute there.

We love our new home and living in this community. We felt at home immediately. It is such a beautiful area and it was worth the wait and all the hard work. The Our Parade Home post below contains pictures of our new home. 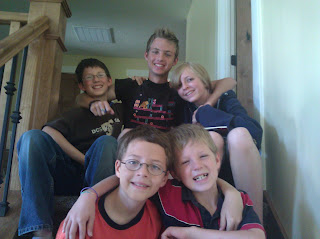 We feel abundantly blessed and watched over this year. We love our savior, Jesus Christ, so much. We feel so taken care of by our Heavenly Father. We hope that you have felt the same this year. We wish you a Merry Christmas and a joyous New Year. We love you.